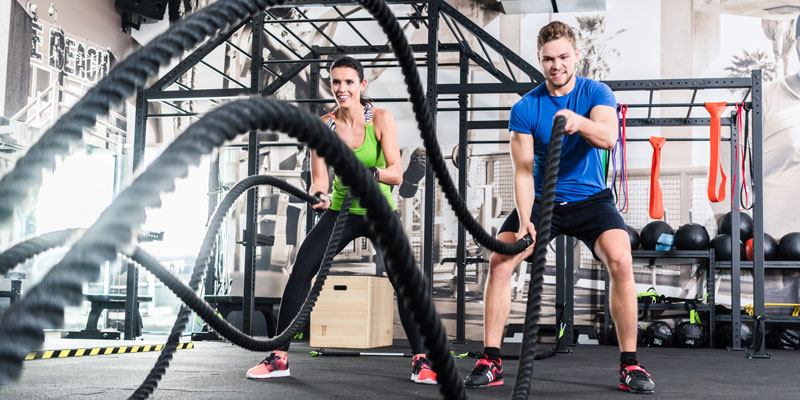 Win The Battle Against Bulge With Battle Ropes

Battle ropes are becoming a staple workout equipment in commercial gyms, such as LA Fitness and Total Fitness. This isn’t surprising as there are many benefits from the proper and regular use of battle ropes, especially as part of a high-intensity interval training (HIIT) program. Indeed, personal trainers and fitness enthusiasts agree that these are valuable weapons in the battle against the bulge – the bulge around your middle, among others.

The long, thick ropes are effective in maximizing cardio and overall work capacity levels, as well as in improving muscular strength, grip and conditioning. These are also used for general physical fitness, such as for people returning to exercise after an injury or illness, albeit under the close supervision of a personal trainer.

In a study published in the Journal of Strength and Conditioning Research, researchers found that even a 10-minute high-intensity battle rope workout will increase heart rate to its peak levels. For this reason, it is widely classified as a high-intensity exercise on its own, even without the principles of HIIT applied to it.

When HIIT principles are applied, your aerobic endurance, explosiveness, and power will be increased! You will then consider battle ropes as essential in fat loss at record speed, aside from the muscle-related benefits that these bring to the table.

Be on These Battle Rope Workouts

Yet another benefit of being on the battle ropes is that you can work on a single or a few major muscle groups at once. Take a look at these fat-burning battle ropes moves and choose which ones you will do right after reading this article.

The burpee combined with the double lateral jump works on your core, glutes and shoulders as well as your hamstrings, quads, and calves.

You can also choose from other battle ropes workouts, such as the single arm front wave with jump squats, the double wave with double push-up, and the double-arm crisscross. You don’t have to take up these workouts either as a beginner since the first step is to become acquainted, so to speak, with handling the battle ropes with ease.