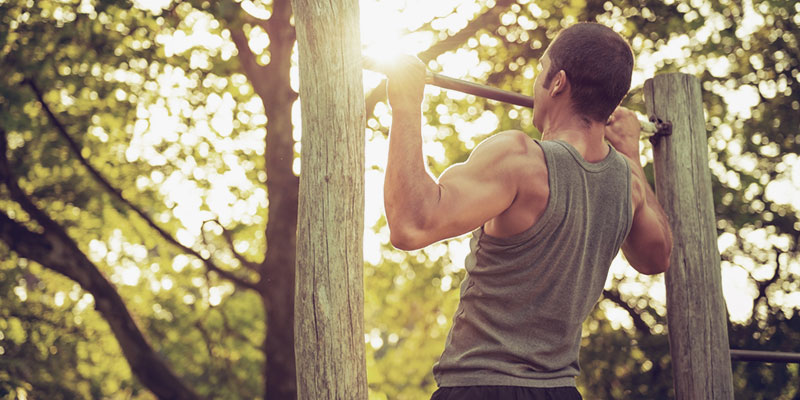 Power Up your Pull-ups Now!

In commercial gyms across the United States, such as in the branches of The Little Gym, the differences between pull-ups and chin-ups are becoming more obvious – and we are not just talking about the positioning of the palms either. Traditionally, chin-ups means the palms are facing in while pull-ups mean the palms are facing out.

But there’s a new way that personal trainers are looking at the differences between the two exercises. Chin-ups imply that the chin should go over the bar while pull-ups require pulling up higher until the chest touches the bar, regardless of whether the palms are facing in or facing out. Between the two, pull-ups are increasingly becoming the more popular form of building muscle mass and definition because of the greater effort involved.

Furthermore, there are two types of pull-ups that can be performed with each one having its pros and cons. First, kipping pull-ups use momentum to perform more repetitions, thus, their suitability for competitions. Second, dead-hang, chest-to-bar pull-ups are best suited for the development of a bigger, more muscular, and more powerful back; these are also known as the regular pull-ups.

We will discuss powering up your regular pull-ups. You can use the following techniques that will contribute to better and faster results.

Basics of the Pull-ups

In order to maximize the benefits of pull-ups, you must first know the basics.

Aim for 20 regular pull-ups but you can also start with 10 until you can achieve the 20 pull-ups. You will observe that you are changing the game for your upper body strength until pull-ups and its variations become part of your muscle-building routine.

When you have mastered the basics, you should power it up especially as muscles must be kept in a constant state of confusion for maximum growth.

First, do more pull-ups. In bodybuilding as in life, practice leads to perfection. If you want to be great at performing pull-ups and getting benefits from the exercise, then you should perform as many of it as you possibly can.

Don’t be fooled into thinking that substitutes for pull-ups, such as lat pull-downs, will strengthen your pull-up capacity. This is not so since pull-ups are pull-ups.

Don’t be discouraged when you can only perform a single pull-up at a time. You can perform several pull-ups interspersed throughout your workout, such as one pull-up between your other exercises until you have inserted your target number.

Do aim for 25-50 pull-ups in a week. You can always perform pull-ups even when not in a gym, such as on a pull-up bar placed on a doorframe. You need not even count the number for as long as you can perform as many pull-ups as you can, whenever and wherever you can.

Jump up to a pull-up bar. Hold it so that your chest is already at bar – or the positive aspect of the movement. Slowly lower yourself – count 4 to 5 seconds during the descent – and assume the dead hang position. Perform sets throughout your workout routine.

Soon, you will be able to perform the full pull-up movement.

Even when you are already doing pull-ups, you can take advantage of the muscle-building and strengthening potential of the negative portion. For example, you can take a longer time in returning to the dead hang position, which means your muscles work harder for longer periods.

Third, make your pulling muscles work harder by engaging in other exercises including the inverted row. This is because the muscle groups that work during an inverted row will also work during pull-ups, which means you will have more capacity to do the latter. Other exercises that can be considered are wide-grip deadlifts, bent-over barbell rows, and T-bar rows.

Settling for second best will result in a second best body where your actual muscle-building capacity is concerned. Push yourself to the limit and enjoy the rewards!