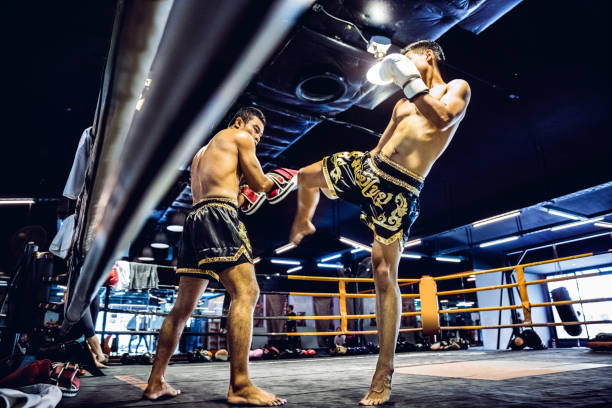 An Introduction to Muay Thai

Muay Thai, also known as “Thai boxing” and “art of 8 limbs” is Thailand’s national sport. Its roots can be traced as far back as the 13th century where it was used in Sukhothai Kingdom’s military.

Muay Thai is a martial art that makes use of 8 points of contact which are:

Other stand-up combat sports such as  karate and boxing use 4 points and 2 points respectively.

“Muay” means “boxing.” It takes certain elements from traditional Thai martial arts which is Muay Boran.  It’s a modern combat sport influenced by British boxing where the boxing ring and codified rules were put in place. Fighters also ditched wrapping hands with ropes and use boxing gloves instead.

In Muay Thai competition, two fighters in the ring throw punches, kicks, elbows, and knees at each other. Sweeps, clinches and throws are also allowed. Muay Thai puts emphasis on traditional elements like the Wai Kru Ram Muay (a pre-fight dance ritual), playing of the Sarama music and the use of the head dress (Mongkon).

The first Thai army was created in order to defend Siam (Thailand) from neighboring kingdoms and tribers. Soldiers were trained in both armed and unarmed combat. One of the most popular Muay Thai stories was the great Nai Khanom Tom who defeated 9 Burmese fighters during his imprisonment.

The techniques used in Muay Thai can be generally classed into 3 – attack, defense, and counter. Training starts by learning the basic movements and stance. Your chin should be tucked in, your body upright, hands in guard position, and feet shoulder-distance apart. If you’re right-handed, you need to keep your left foot slightly to the front and your right foot approximately 45 degrees pointing to the outside. If you are left-handed, your right foot should be in front and your left foot 45 degrees pointing to the outside. This stance helps you maintain your balance while making sure you are ready to defend or strike.

In Muay Thai, the primary punch techniques are the jab, cross, hook, uppercut, spinning back fist and overhead punch. Your punching power is generated from the feet up, you shift your weight at fast speed as well as in the rotation of the shoulders and hips.

The elbow is an effective weapon in Muay Thai and the techniques are: sideways to the head, reverse to the chin, from the top down, flying elbow, and spinning back elbow.

The Muay Thai kick is delivered from the outside aiming to hit the chin, with the arm swung backwards generating force with the rotation of the hips. Kicks can also be aimed at the opponent’s legs, body, back, arms or the head. The most common technique for throwing kicks is the standard roundhouse side kick. Other popular ones include axe kicks, spinning back kick, and acrobatic cartwheel kick.

Knees are used during clinching and often thrown to the body like the rib cage, thighs and even the head. To generate more force, knees are thrown from the rear leg, either in straight or diagonal direction.

The teep, which is the push kick, is used as a defense or offense technique to keep the opponent at a distance and preventing a strike. You can use the teep by doing a straightforward front push kick on the leg or even the face. It can also be thrown in a side kick or jumping front kick.

Clinching in is a grappling technique that uses both elbow and knee strikes. Takedowns are allowed and done during clinching to help you outscore your opponent.

Unlike many martial arts that revolve on forms (katas), Muay Thai is straightforward and there is no detailed choreography to worry about. The moves are not designed for entertainment purposes. Muay Thai is a stand-up striking style that is designed to get the most impact when fighting an opponent. It’s a no-frills, no choreography martial art. No complicated movements, just effective and instinctive techniques.

If you’re curious and want to try Muay Thai, try this 30 minute workout: