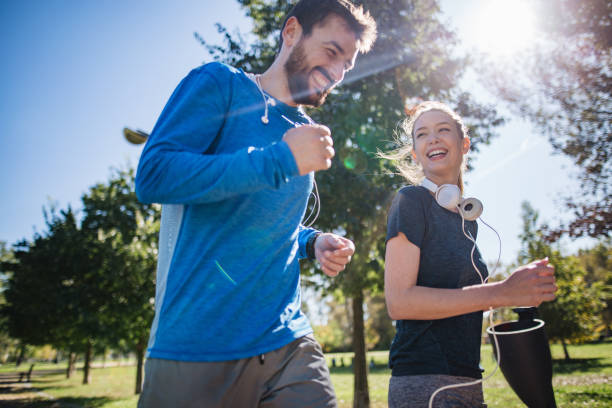 Top Tips on Turning Your Run into a Fun Exercise

Have you heard about Crunch Fitness? This was just a small gym back in the East Village in New York. But they decided on hiring creative fitness instructors, who were tasked to make the workouts more fun while still remaining effective.

They then came up with fun programs such as Hip Hop Aerobics, Co-Ed Action Wrestling, and Cyked Yoga Cycling. Word of these programs spread, along with their “No Judgment” policy, and today they now have 200,000 members for their various locations.

Making workouts more fun may seem great, but how exactly do you make jogging more fun? Here are some tips that can help:

Running isn’t fun for lots of people because of pain and injuries, and those can be prevented with the right gear. Start by visiting an actual specialist running store, where the folks are all runners themselves. They can then set you up with the right shoes that will fit you properly.

Then they can get you the right clothes as well, which allows for proper movement while you’re also protected against the elements. For the most part, you’ll want breathable shirts and clothing for different types of weather.

Jogging is often like eating out or going to the movies. It’s a lot more fun when you’re not going alone, and you’re with your friends. Your best running buddies are those who are in the same skill level as you, and they have similar fitness goals to your own.

Designate a convenient hangout as your meeting place, and then relax afterwards. It’s better if the hangout is close enough to a deli that offers coffee and breakfast foods. When jogging is more like a social event than a chore, it’s definitely a lot more fun.

Going too hard is a classic rookie mistake, and you’ll just be too discouraged to continue when the pace is too difficult. Instead, take it a lot easy on yourself when you’re just starting out.

You can just adjust your intervals later on, as you progress in your running capabilities. Increase your jogging time as you reduce your time for recovery. Try to progress until you’re able to run without resting for at least half an hour.

Whenever you progress and increase your jogging time for the day, give yourself a small but meaningful reward. This can be anything you enjoy, such as bingeing on your favorite show afterwards or taking a restful nap. You can get yourself a new pair of shoes or a new outfit. You can go to the movies with friends, or go out for dinner with a partner.

Just don’t reward yourself with something that will derail your diet! A couple of thousand-calorie burgers won’t be good for you, if you’re running to lose weight.

Jogging can really become boring when you’re doing the same thing again and again. It’s like watching the same movies each night, while eating the same dishes.

Change routes constantly. If you’re running in town, run through different streets each day. Try driving to a different park and run there. You might even make new friends in those parks.

A running app can help a lot, as it can track your progress and even provide helpful coaching. It’s also a lot more fun when the app adds a playful or competitive element to your running.

Have fun jogging, and stay safe!