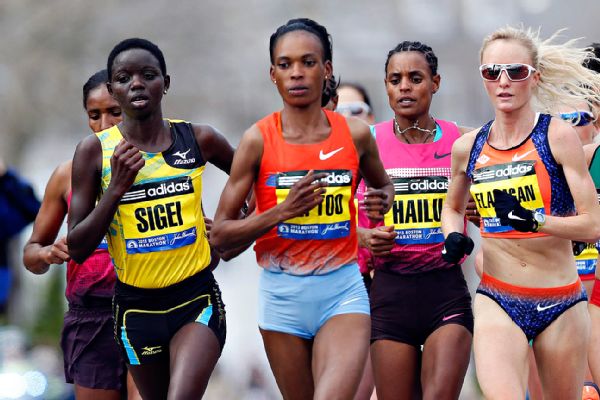 Others may call it as the “wall” that runners suddenly face while running in a 26.2 mile-marathon. Sometimes it hits them very early like during the 15th mile or 18th or even at their 20th mile. But, rarely that you will hear someone facing a “wall” at 26.0. Come on, that’s actually very, very close to the finish line!

However, just recently, this happened. Famous runner Hyvon Ngetich of Kenya was able to make her first 26 very tedious miles of her Sunday’s Austin

Marathon flawlessly. She was doing quite well actually because she was leading the batch of pro runners that day.

It was only until she was in her 26th mile that as soon as she rounded the corner to the finish line, that she just stopped and fell to the ground. The people were shock and initially felt that it was a heart-breaking moment. All must have collectively gasped, “Oh my! She only had 0.2 miles to go!”

But what even shocked the audience more was her determination to finish the race. She did not give up, instead, she started to crawl. Yes, you heard it right. She did not walk or run, because she was not able to do it anymore that time. The “wall” she faced must have been too strong to push, but she did push it with all her might to break it. She crawled and still finished 3rd place. This is really an inspiring story to tell.

Refused to be Helped

Race volunteers were alert and tried to help her, they even brought out a wheelchair, and yet, Ngetich, always so professional and very determined, refused the wheelchair! It was perhaps because she knew she will be disqualified if she took it.

Here were her words: “Running…you always have to keep going, going,” this is what she told CBS Austin affiliate KEYE.

She related to CBS that she dis not remember much of what happened prior to the finish line “I don’t remember. Finish line, I have no idea.” Perhaps she just continued with her goal of finishing the maraton.

She became famous overnight and many people saw the video later. It is still inspiring, and heart-warming especially the one when she paused first to cath her breath and refused to stop until she was sure she finished the marathon. She finished it with a very short time of time of 3:04:03.68. That was such an impressive feat!

She was praised by Austin Marathon race director, Jon Conley and was quoted by CBS News, “I’ve seen athletes wobble and fall; I’ve seen athletes crawl across the finish line,”  “But that story of her going 26 miles, and then crawling the last 450 feet or so—never seen anything like it.” It was indeed, one of a kind.

She came in 3rd place but she was very close to the one who finished the second place by merely just 3 seconds! The one who got first place only bested her by 10 minutes. Because of this amazing show of courage and determination, Austin Marathon decided to award her the prize money the second winner got.

However, medical professionals would like to remind us that Ngetich is a professional marathon athlete and was competing for prize money. Runners who are not trained for this ordeal should always check their body.

Laura Goldberg, who is a licensed medical doctor has an advice for other people out there. “For the non-elite crowd, there should never be a reason why runner a should crawl to the finish”. She is a sports medicine specialist at Cleveland Clinic and medical director of the Cleveland Marathon told ABC News. For her, we must always listen to our body and must not refuse medical help. It is for our own good.

A Wake-up Call to us

Still, her crawling moment will always be a wake up call to everyone who sometimes think it’s the end of looking for something better. For instance, people who stopped going to the gym to train and just became comfortable with the sedentary life.

By being comfortable with being a couch potato, we are actually hitting like a runner’s wall in our lives.

A runner’s “wall is defined as that moment in marathon or long distance running when the runner feels it is becoming more difficult for him or her. Some people say this is the time you are both tested emotionally and mentally.

Walls can actually make or break  your marathon race. Before it breaks your health, go sign up at a gym nearest you to make yourself stronger and a better runner.

You may try going to 24 Hour Fitness or Retro Fitness if you have difficulty catching up to the closing time of your old gym. At 24 hour Fitness, you can come in anytime because it is open for 24 hours. They have a motto – “improving lives through fitness” and with this gym, you can reach your goal to improve your life as well.