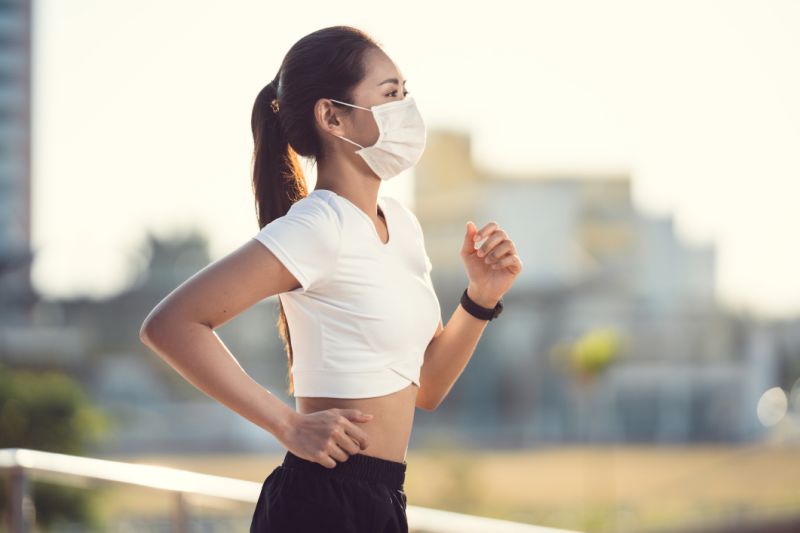 Exercising with a Face Mask: Is It Safe for Everybody?

When gyms like LA Fitness reopens, there will likely be a face mask policy in place. But is it safe in the first place to wear a face mask while exercising? There have been concerns about it, such as carbon dioxide just cycling inside the face mask and, thus, causing adverse effects.

Wearing a mask while exercising is safe for most people, particularly for people who have excellent lung capacity or who are used to wearing it for prolonged periods. There’s really no basis for the assertion that it can lead to suffocation.

But there’s a caveat, too. You have to monitor your physical reactions while exercising with a mask on since it can have an effect. You should watch out for specific symptoms like dizziness, lightheadedness, and shortness of breath, as well as tingling or numbness of your body.

The type of material and the thickness of the mask determines the amount of air flow getting into your lungs, too. You will likely have less air flow if you’re wearing a fabric mask as against a surgical mask or an N95 mask.

Even if you’re in top fitness form, you should expect to become tired faster when exercising with a face mask. But in the course of a few weeks, your body will eventually adapt to the reduced air flow and oxygen intake. Your body becomes more efficient at using oxygen in much the same way as when you’re training for an ascent to Mt. Everest.

But It Isn’t Safe for Everybody

But individuals who have an underlying medical condition, particularly those related to the cardiovascular and respiratory systems, should take extra precautions. These medical conditions include asthma, cystic fibrosis, and chronic obstructive pulmonary disorder (COPD).

If you have one of these underlying medical conditions, you may or may not be suitable for exercising in the gym with a mask on. This will depend on the severity of your condition – the more severe your condition, the better to lay off the mask while exercising. Your doctor may even recommend not exercising at all during attacks.

Besides, people with an underlying respiratory and cardiovascular conditions are immune-compromised. As such, they should stay away from crowded places including gyms and fitness centers at this time.