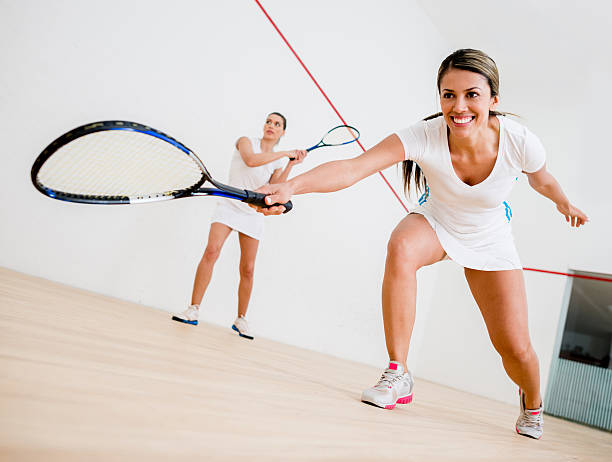 An increasing number of gyms these days, such as LA Fitness, are also putting in some squash courts into their premises. It actually makes a lot of sense, since squash is one of the best sports you can take up to keep yourself trim and healthy.

Here are some of the benefits you enjoy when you play squash regularly:

Play squash on a regular basis, and eventually you’ll be quite strong and fit. The strength comes from constantly hitting the ball as hard as you can, while you also need to be fast and accurate. As you get better at playing squash, you get stronger. That’s because all that hitting tones the muscles in your abdomen, arms, and legs.

You keep on using those muscles in your upper and lower body, and at the same time, you’re engaged in lots of stop-and-sprint movements. All these things can really burn up a lot of calories. A game that lasts for 30 minutes will burn off as many as 500 calories during that time.

And yes, this also helps with your cardio, as it involves a lot of movement that gets your heart rate pumping.

The game involves a lot of different movements, actually. You sprint and stop, and then sprint again. You have to do a lot of jumping and bending, and even quite a few spinning moves. All these movements require that you’re nimble on your feet. You have to be able to run and stop quickly, and change direction constantly.

You have to do all these movements, even as you maintain a steady, balanced position so you can hit the ball hard and accurately. Unsurprisingly, you become more agile the more you progress at this game.

Again, this is due to all these movements. Lots of times, the game requires you to move your body outside your everyday range of motion. That means the game stretches your joints and ligaments nicely, which promotes flexibility and enhanced blood flow.

In some parts of the game, you can compensate for your relatively slower speed by being able to do deep lunges and stretches. These stretches also conserve your energy, so you still have enough stamina for the final points of the game.

The game encourages hand-eye coordination, because you need to see and hit the fast-moving ball properly. You need to coordinate your eye movement with your hand movement, all while you’re mentally computing where the ball will go—and where you need to go to hit it. The game really promotes the finesse of your movement.

Lots of people sometimes find it hard to focus, whether on work or some chore they have to do. When this happens too often, it can become a bad habit.

But with squash, you must pay attention. You need your eyes to focus on the ball at all times. You have to note where it hits, and then estimate how and where it will bounce back so you can position yourself properly to hit it back.

This game also encourages you to develop your peripheral vision. The better squash players use their peripheral vision to note their opponent’s position and movements, so they can figure out where to hit the ball to catch out of position.

When you’re feeling stressed, frustrated, or just plain angry after a demanding day at the office, a game of squash may be just what you need. You can take and vent out all these negative feelings as you hit the ball as hard as you can. It’s very satisfying to just hit that ball again and again, and it’s a much better way of venting than wrecking your office in frustration. It doesn’t even wreck your hands, unlike hitting the wall with your fist.

Ask any gym trainer, and they’ll tell you that quitting is one of the most common problems with gym memberships. It’s just that people end up not enjoying their workout, so they eventually stop doing it.

But squash is a lot of fun. About 20 million people in the world play squash regularly.  In the US, the number of squash players grew by 82% from 2007 to 2011, and today there are about 1.6 million American squash enthusiasts. You’re more likely to quit jogging than you are to quit playing squash, once you get really competitive!

HOW TO PLAY SQUASH | A Beginner’s Guide